We’re sitting in a barbershop in Hackney, waiting for EO to do a quick outfit change. It’s a fine day outside, which bodes well for the afternoon’s shoot locations. He emerges from the back smirking, shuffling out into the centre of the room in track pants at least a size too small, before erupting into laughter at the state of his legs.

The Reebok Classics collection EO models captures the essence of an era he didn’t even see the first time around. ‘It’s like Fresh Prince of Bel-Air, and all these baggy clothes and stuff… you know I’m only one year away from the 90s, if I was born one year earlier I’d be a 90s baby’. Bold colours, half zip tops and the welcome return of archive silhouettes like the Daytona and Aztrek represent the best of the era, given new relevance by the new breed of entertainment specialist.

At 17 years old, it probably felt like an earlier start for EO than it did for the rest of the assembled crew – if you thought life after German would be sleeping ‘til the afternoon and the end of homework, the early trappings of internet and UK rap fame suggest otherwise. Despite a UK top 20 and over 30 million views, the 9am starts are going nowhere. 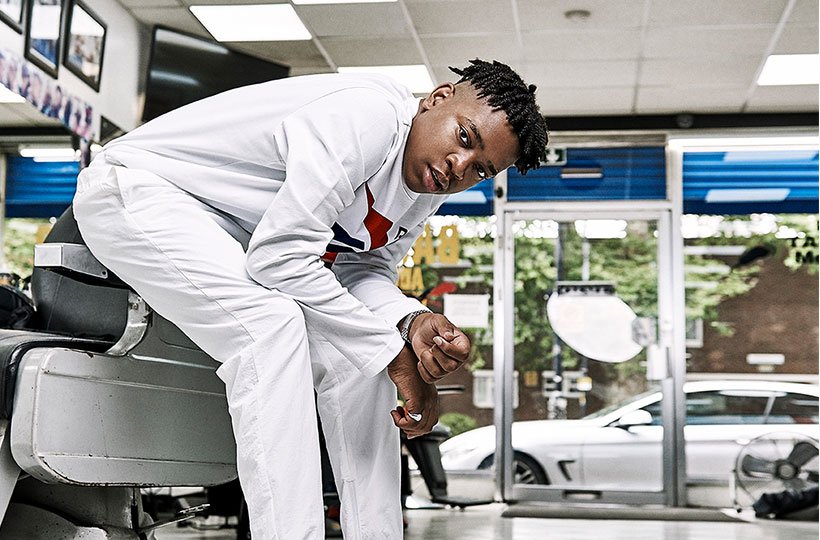 In fact, between 160,000 YouTube subscribers, studio sessions and shoots like these, life is pretty hectic, and that’s before you consider the tour he’s got in the works, and the fact he’s still squeezing in schoolwork. ‘Yeah, the whole school thing… it’s a sticky one, still’ EO chuckles, looking over at his manager.

When we sit down to speak, he’s already been in and out of 90’s inspired tracksuits, shot in the barber shop and outside, and now bundled up in the back room of the shoot’s Winnebago with cameras, lighting, and 3 people out of shot. It’s hot, airless, EO still has a location left to shoot, but it’s all smiles. It’s hard to tell if it’s serious professionalism, or just an infectious, positive attitude.

Although he’s got a lot going on, he loves the fan encounters that have punctuated the time we’ve spent in public places. ‘I like it when people come up to you saying they like your music and that it’s all love’. After the interview, as we’re waiting outside the Winnebago, a young lad hesitates at the door and his Mum asks ‘is EO in there?’ She tells us how much her son and his friends love his videos, and they’d got a picture with him at Wireless. EO bounces down the stairs from the cab and asks the boy his name, has a chat and gets a few pictures. ‘Here, give me a hug. See you later, yeah’ the boy leaves elated.

‘I know that, like, to the younger generation I’m the guy’, he laughs, ‘I don’t wanna gass myself but like the younger generation really, really support my ting, so I really rate it’. EO is part of the new breed who didn’t experience 90’s trends the first time around and who’ve always known YouTube as a legitimate entertainment platform and a potential career choice - the YouTube Partner Programme had been around for a good few years before EO hit double figures. 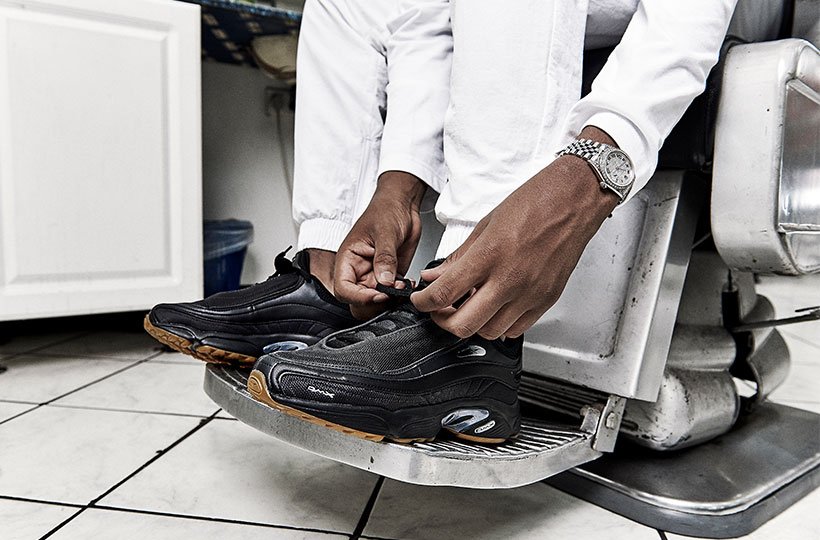 Still, he knows success is a long road. ‘I started making YouTube videos and started making parodies and stuff and yeah that’s how I started it. When you first start it’s a slow process, your heart has to be in it from the beginning cos bruv, if you’re in it for the money, you’ll make a video and see no money and you’ll just be like oh my god. I made 5 videos and I saw literally - literally no exaggeration - 1p of revenue, I was like… you always start slow but then you start to grow. I think it took me like 3 or 4 months before things started to pick up.’

Despite finding his feet in parody, his track German is a serious foray into music, and at 30,000,000 views and counting, early signs are looking promising. He’s capitalising on an engaged YouTube audience, and crossing over to UK rap fans in a big way.

‘I am loving the best of both worlds. I just feel like YouTube is a place where I can showcase more of my personality, cos there’s lots of artists out there that have a nice personality but they just don’t show it and its just unfortunate. Obviously, I have the platform to show everybody how my life is going and I’m going to continue to use it.’

The success of German means he’s not just showing people how it’s going online – in the past year he’s played Wireless and Capital XTRA, crowds fitting for the peak of a music career. ‘It’s a BIG difference my guy, what the flip bruv, listen I have 160,000 subscribers and I perform them at wireless in front of 50,000 people - and 50,000 people is like a whole ocean of people it’s like… bruv, it just doesn’t stop. It just goes and goes like what the hell it’s so mad. Numbers online, when you see it online you just underestimate it but in real life it’s so much more powerful’.


With the promise of full live sets in the not too distance future, ‘How far down the line?Hmm next year?’, and singles dropping even sooner, it’s clear EO is much more than a class clown – not that he’s about to leave comedy behind any time soon. The final location of the day is a basketball court – latching onto a stray football EO finds his range around the key, drifting back to the 3-point line. He shouts to his manager ‘If I get this you have to let me drive home’.

‘Looks like you’re walking.’ Best get that driving test booked.