Airing out 20 years of History: Looking back on the Nike Air Max 97 The design was bold… so much so, in fact, that the original prototype omitted the signature swoosh altogether; the strength of the shoe’s individuality was seen by designer Sergio Lozano as enough to become instantly synonymous with the brand.

He was right - despite the minimal branding on the heel of the final version of the shoe, the wavy upper, exposed air units and neon accents (however brash) found traction within youth culture, and was a highly sought after silhouette in Europe and Australia.

Faster than a speeding… train?

When 1997 rolled around, rather than hitting an iceberg, the progressive design of the Air Max 97 instantly found traction in popular culture around the globe.

The shoe incorporates sleek lines into a decidedly chunky silhouette – throw in a reflective upper and you’ve something that stands out on the shelves but is destined to polarise opinion.

Rather than poring over his contemporaries searching for inspiration, designer Christian Tresser drew from nature, and - perhaps more strangely - mountain bikes. The ripples of water as a raindrop hits a puddle influenced the waves in the upper and the reflective Scotchlite 3M taping was inspired by mountain bike design – 90’s frames were finished in silver aluminium and reflective coatings. The first-of-its-kind concealed lacing system completed the sleek lines; you can see why Nike went for the ‘inspired by Japanese bullet trains’ angle.

The similarities may be uncanny, but Tresser himself never referenced futuristic high-speed rail as an inspiration. It made for a cool name, though.

The bullet train myth/marketing spin probably contributed somewhat to the Air Max 97’s popularity, but it was the design itself and the timing of the release that catapulted the sneaker into cultural significance. It’s futuristic vibe was in line with the aesthetic of the era: with the year 2000 looming large on the horizon it felt like the space-age future was both tangible, and within reach. The cutting-edge technology of the ’97 was guaranteed to survive the millennium bug, too - who doesn’t want to be cushioned on a full-length air unit while technological progress is crashing down around them?

Celebrities around the globe championed the shoe - from Michael Johnson to Sporty Spice, icons across popular culture were papped in Tresser’s reflective calling card – but It was in Italy where the silhouette really took off.

It's fitting for a country with art and fashion in its cultural DNA to take such a forward thinking shoe into its heart - the ostentatious design was a hit for nearly a decade despite only being on sale for just over a year upon its original release. 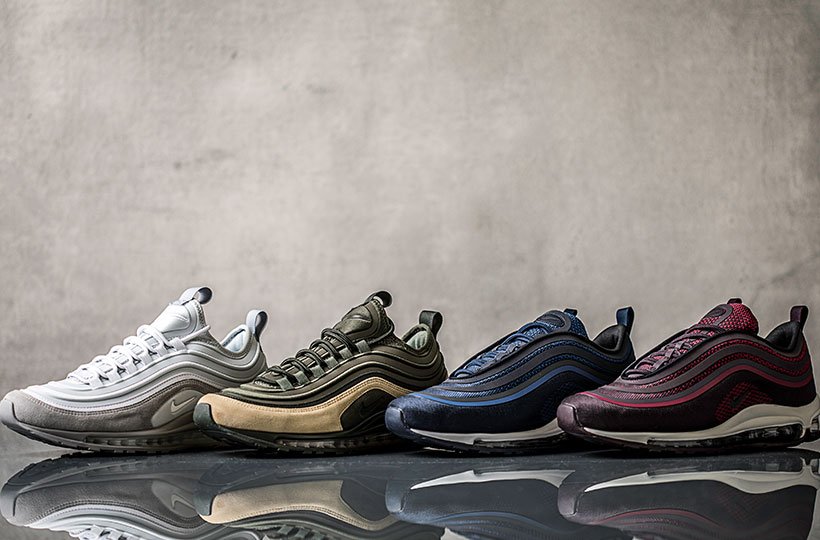 Nike repaid the staunch support for ‘Le Silver’ with various Italy-only special editions, including a black, luxury leather ‘made in Italy’ iteration, and an early rerelease of the OG Silver Bullet in November 2016. April this year saw the wider rerelease of the Silver Bullets, with sneakerheads reportedly selling their firstborns to get a slice of Nike history (ok, not literally, but they were tough to get your hands on).

With the latest iteration of  Air Max 97, the Ultra, launching back in August, this week sees the addition of 4 more men’s colourways to the Footasylum collection. Taking the iconic silhouette and upgrading the upper for a more lightweight, contemporary take, the newest releases feature Platinum, Noble Red and Khaki/ Mushroom colourways to add to your rotation.

Check out the full collection of Nike Air Max 97 right here at Footasylum. Win a Nike X Collective Bike: Down To Design